Vegetable oil as an alternative fuel 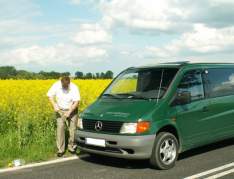 Vegetable oil can be used as an alternative fuel for diesel engines. In this article I’ll describe how to use straigh or waste vegetable oil for your compression ignition engine.

Vegetable oil can be used as an alternative fuel for your car in one of three ways:

In each of the above, all the engine parameters, e.g. power, torque, and fuel consumption, remained on the same level as for petrodiesel. It is worth mentioning, that the first diesel engine ever was fueled by peanut oil, not by petrodiesel!

Using vegetable oil as a single fuel requires some engine modification. It is very viscid, much more than diesel fuel. Because of that standard diesel fuel injector doesn’t spray vegetable oil to small enough droplets. This means that it’ll vaporize slower, and will not become burned completely. Some residual oil will then be collected inside the cylinder and by engine oil.
To overcome the high viscosity, the vegetable oil needs to be heated before it can be sprayed by injection pump and injector nozzle.

The vegetable oil must be heated to at least 70°C (158°F). At this temperature level viscosity of is comparable to viscosity of cold diesel fuel. Because of that, engine must be started on petrodiesel. When it achieves required temperature, warmed vegetable oil from second fuel tank is fed to injection pump. Vegetable oil is heated inside heat exchanger with heat from water in engine’s cooling system. In some cases, the fuel tank itself is heated, in some engines heated fuel filters are installed.

You can buy on the internet some kits that allow you to change your diesel engine into one that’s fueled with vegetable oil. Those kits consist of heat exchanger and electrovalves. Those valves allow driver to switch the fuel without leaving his seat, as fast as cooling water heats itself to required level. Some kits have also fuel tanks and some additional equipment.

The engine should be started and stopped on petrodiesel. The vegetable oil if left in fuel lines or anywhere else in engine for cooling would make starting this engine more difficult or even impossible.

If you don’t want to change anything in your car, consider using vegetable oil as fuel additive. Addition of 15-20% od vegetable oil to your fuel tank does not affect engine’s work and doesn’t require installing heat exchanger to heat the fuel. If you’d like to use more vegetable oil, up to 75% of total fuel, you would need to mix it with DFX additive. You add it in 1:320 proportions, one litre of DFX costs about $25-30.

Is vegetable oil safe for engine?

There are many engines fueled with vegetable oil out there. Some of them are grouped in vegetable oil fuel database. This database consists of 340 vehicles, of which:

5 Responses to “Vegetable oil as an alternative fuel”

Leave a comment, and if you'd like your own picture to show up next to your comments, go get a gravatar!